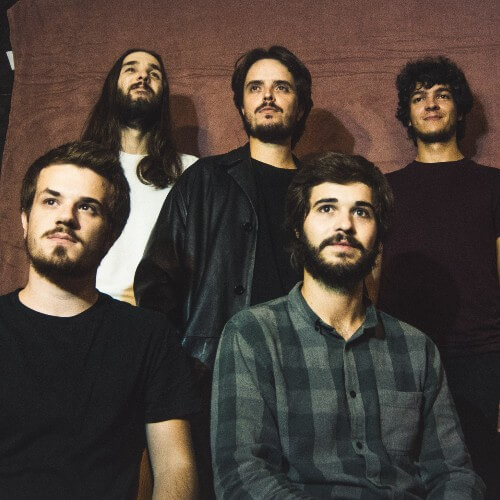 Dream People are a band from Lisbon, Portugal. Their music reflects the lives of five young men coming of age in a beautiful yet poor country, where being a musician is an act of courage… or perhaps madness.

Since 2019, Dream People have been establishing their personal sonic space within the Portuguese music scene. With their first release, Soft Violence, they showcased their unique combination of synthetic atmospherics containing variations of dream pop and melancholic shoegaze. Soft Violence was described as one of the best Portuguese records of 2020 on Spanish blog Mindies and took the band to many iconic festivals, such as Vodafone Paredes de Coura Festival.

In their latest release, Almost Young (March 2021), we find a more mature sound. First single, People Think, has been a great success, having been added to both MTV and national radio station Antena 3’s playlists.

Almost Young reveals a band that is now comfortable singing about personal issues and that believes that authenticity is where the depth of one’s work lies. A group that doesn’t flinch at painting reality as it is: complex, intricate, beautiful yet sometimes painful. That is their purpose. They are dreamers in search of reality.

Dream People will perform as part of WHY Portugal’s showcase.