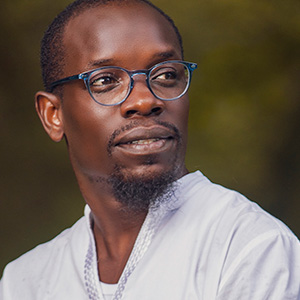 Dave Ojay is an arts manager specialising in artistic direction at festivals, and an environmentalist pushing for the planet’s water resource restoration through art advocacy.

Eager to explore what his surroundings had to offer, Dave settled into creative performing arts after a short stint in journalism. His experience of working with international festivals inspired him to pursue cultural events at sites of natural heritage. Over time, he became concerned about Lake Victoria. The idea that the largest fresh water lake in Africa, on which millions depend, could be allowed to lie in the current sad state due to water hyacinth menace and human activity did not sit well with him. Since then, he has consistently spoken out for the plight of the lake through the #JusticeforLakeVictoria art advocacy campaign.

Dave’s creative activism journey and ideas for innovative restoration moves were outlined in his TEDx2019 Talk where he spoke in Dar es Salaam and Accra Global Landscapes Forum in Ghana. This was after completing a study scholarship on social change making in Kerala State, South of India at the Kanthari Institute. He has worked with leading international artists, development and cultural organisations since 2008.

He founded NAAM Festival as a creative activism initiative to restore endangered lakes to their original grandeur. As a non-conformist, critical questions power Dave’s imagination for a better planet. He now runs a global environmental justice campaign for endangered lakes known as MY LAKE MY FUTURE launched in India (Lake Vellayani) and Peru (Lake Titicaca) 2018 to speak for other endangered lakes.

Most recently he played a key role as festival and art director of the latest Pan-African gathering of Knowledge, Art and Networking or KAN Festival in Arusha, Tanzania 2019/2020 using the platform to push climate agenda through how creative meaningful festivals are designed.

He is a member of The Climate Change Theatre for Action, New York since 2017.