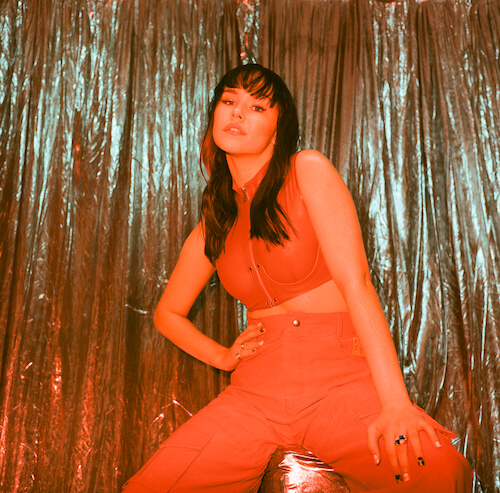 Early in her career, UPSAHL released songs that gained much-deserved recognition throughout the Phoenix music scene. As a graduate of the Arizona School for the Arts, she went on to ignite a groundswell of fan adoration and tastemaker praise by way of numerous indie alternative gems. Can You Hear Me Now achieved a palpable viral buzz followed by the widely praised single Drugs, which featured on her debut Hindsight 20/20 EP and has been used in nearly 2m TikTok videos, reaching #6 on the TikTok Viral Chart and #1 Sound on the TikTok Trends Chart. Drugs led to a momentous year for the “up-and-coming indie-pop queen”—according to Alternative Press.

2019 saw UPSAHL take the stage at Lollapalooza and support acts including PVRIS, Joywave, BROODS, and Young the Giant. Additionally, Smile For The Camera hit Top 40 on Alternative Radio as it attracted glowing critical acclaim and YouTube claimed UPSAHL as their ‘Artist on the Rise’. Nylon proclaimed, “She’s on her rock star ish,” and NME declared she “has a knack for fusing fizzy hooks with her drawling delivery of pithy lyrics. The result – her vibrant alt-pop bops.”

2020 was a standout year for UPSAHL, releasing her second EP Young Life Crisis, which Billboard crowned as one of the top 25 pop albums of 2020. Earlier in 2020, UPSAHL undertook her first co-write on Good in Bed for Dua Lipa’s Grammy-nominated chart-topping blockbuster Future Nostalgia, and recently lent her pen to Madison Beer on her fiery single BOYSHIT, as well as Mike Shinoda’s upbeat anthem Happy Endings, which features her and iann dior.

UPSAHL‘s rise to pop ubiquity (on her own terms) has only just begun.