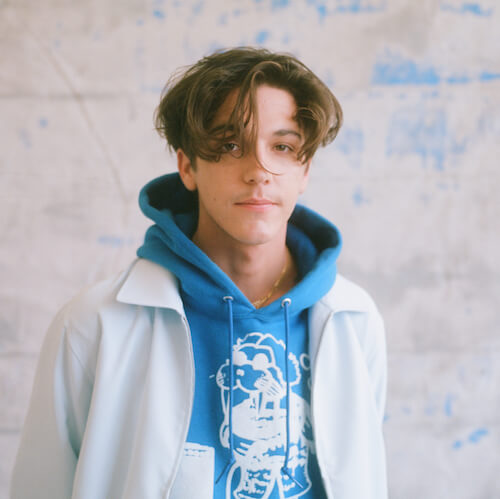 Rather than presenting some unattainable ideal, ROLE MODEL—a.k.a. Tucker Pillsbury—finds a perfect hybrid of observant hip-hop, pop, and alternative inside of his own personality flaws.

With 120 million total streams (and counting), and acclaim from i-D, HIGHSNOBIETY, Complex, and more, this approach consistently endears him to fans and tastemakers alike. However, the vision flourishes on his second EP.

“Imperfections are exactly what make you perfect,” he affirms. “There should be a role model who isn’t shiny and polished, because that’s not realistic.” Born and raised in Portland, ME, music was initially far from Pillsbury’s mind. He attended film school in Pittsburgh, and “kind of hated it.”

“I had these two friends who recorded themselves and rapped. We made all of these songs like a joke one night. Music was not in the plan whatsoever, but I fell in love with it.”

In 2017, he uploaded Cocaine Babe to Soundcloud and ignited a palpable buzz. Early on, the late Mac Miller reached out and expressed admiration for his music, encouraging him to keep going. ROLE MODEL’s 2019 EP, oh, how perfect, popped off powered by tracks like hello! and that’s just how it goes.

Throughout 2019, he assembled his second EP,  and uncovered an important thematic thread. “Everything was written on a day when something good would happen to me.” By capitalising on those good days, he changed his perspective. “The biggest theme in all of the songs is acceptance,” he explains. “Instead of dwelling on negativity, I’m telling myself it’s okay to move forward.”

That newfound positivity is evident on new singles blind and for the people in the back, the former of which has been steadily growing in popularity since its release in late July.

They’re just the first tastes of an exciting new chapter for ROLE MODEL.