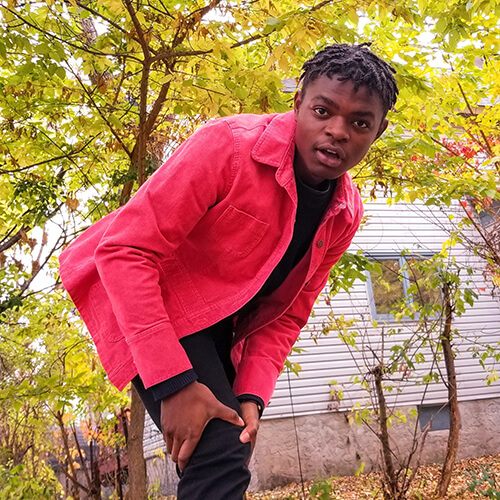 Miloe is the musical project of Bobby Kabeya, a 19-year-old artist based in Minneapolis. Growing up in the Democratic Republic of Congo, Bobby was raised by musical parents who met through the church choir during college and taught him to play the piano at the age of six. His childhood home was filled with the sounds of influential Congolese artists Papa Wemba and Lokua Kanza, South African reggae legend Lucky Dube, and Western luminaries Bob Marley, Mariah Carey, and Lionel Ritchie.

When he was eight years old Bobby traveled over 7,000 miles with his mother and three younger brothers to reunite with their father, a journalist who was granted asylum in Minneapolis three years prior. Once in the US, Bobby began to pick-up more instruments through the local art and after-school programmes, eventually beginning to jam with friends outside of school in his early teens.

In 2017, Miloe was officially formed, building a local fanbase through high-energy basement shows with a seamless blend of indie pop and rumba folk. His self-titled EP was released in 2017, followed by singles Motorola and Everything (That Should Go). The follow-up Greenhouse EP, that came out in October 2020, felt both energetic and youthful, possessing lyrics that aren’t afraid to lean into teenage melodrama and idealism.

“The Minnesotan climate can feel so limiting compared to where I grew up, almost like we’re waiting half the year to actually live our lives. I created this Greenhouse EP to provide a nice contrast to those sluggish seasons.” Living in a region that faces harsh winter for much of the year, and in 2020 served as ground zero for uprisings against police violence, it was important to Bobby that he provided some sunshine for his community to hold onto.