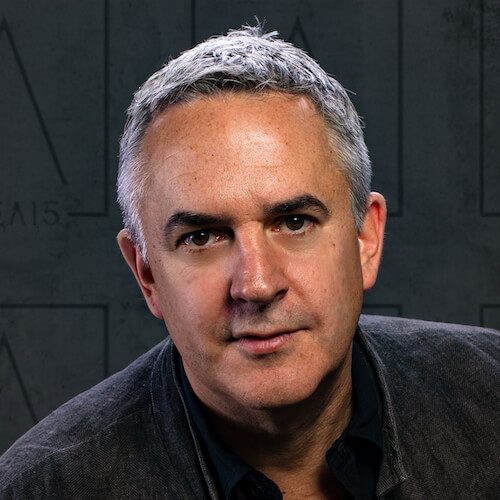 Michael is the chief creative officer at AREA15, and is the founder and chief executive officer of Beneville Studios.

He is the creative force and visionary leader behind AREA15. Unbounded by conventional thinking, artist and designer Michael Beneville and the team at Beneville Studios bring a unique perspective and a multitude of talents to the world of traditional real estate. Fusing culture, entertainment, art, and retail, Michael brings together artists, creators, and visionaries from all over the world, and invites them to collaborate within the immersive bazaar of experiences that is AREA15.

Michael is a storyteller. He works across all scales and is agnostic to medium. His creative practice is informed by a life that, from his earliest days, has been lived across the globe – in Beirut, Morocco, India, Mauritius, Senegal, Ivory Coast, London, and the United States.

At 25 years old, he moved to New York City to pursue a life as an actor and artist. He first made ends meet hustling balloon animals beneath a lamppost in New York’s Union Square. Today, Beneville Studios is located just around the corner from that lamppost.

Michael and his team specialise in realising the visions and telling the stories of their clients, whether individuals, families or corporations. At any given time, they might be simultaneously and discreetly creating projects as varied as privately commissioned books, machines, films, fine art, and corporate headquarters for the world’s most exclusive clientele.

Beneville Studios excels at working directly with CEOs and their leadership teams to express a company’s vision and brand in three dimensions. Working collaboratively with multiple teams, Beneville Studios’ creativity inspires the genesis of the design, grounds it in the mission of its clients, and forms the connective tissue that holds the teams and the concept together as the project progresses.

Michael Beneville and Beneville Studios have been creative consultants for the award-winning New York City headquarters of iHeartMedia, the completely reimagined entrance to the Empire State Building Observatory, the lounges for BLADE helicopters in both New York and Miami, and the Warner Music Group offices in Los Angeles. Today, the firm’s purview includes millions of square feet of design and projects that span the globe.