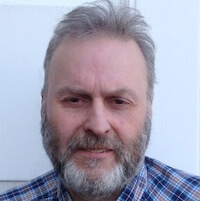 Keith brings to panels the real-world views of someone ‘on the frontline’ and drawing on personal experience gained from a 40-year professional career involved with planning and managing live music events and the international concert touring sector.

Having got his first foot on the ladder in 1979 whilst at Salford University as the students’ union social sec / promoter – he booked artists such as The Jam, Blondie,and Boomtown Rats. He decided to continue in the same direction and managed to join Adrian Hopkins Promotions, an established concert promoter/artist manager/tour merch company.

On the second day in the job, he was sent on tour with Genesis. Many years followed in which he worked with major artists such as Thin Lizzy, Peter Gabriel, Johnny Cash, Ozzy Osbourne, Phil Collins, Dire Straits, Van Morrison, Torvill & Dean, working throughout the UK, Europe, the US, Canada and Japan.

In 1994, he was hired by John Giddings at SOLO-ITG. They had a roster of major touring artists such as David Bowie, Phil Collins, The Corrs, Genesis and SClub7.

Solo partnered with Princes Trust /CapitalFM in creating the first annual Party In The Park event in Hyde Park with a cap of 100,000. Keith was responsible for the site design and managing the build of the concert site, procuring infrastructure suppliers, and overseeing health and safety and planning with the local authority.

He was seconded to TNA (the international partner of Solo-ITG), the world tour promoter of U2’s PopMart Tour, to be their site co-ordinatior for a three-month tour of European football stadium shows.

Then came a period working for ITB, where he worked on shows for Diana Ross, Bob Dylan, Robert Plant, and Lenny Kravitz. With the highlight being a Simon and Garfunkel reunion show for 65,000 in Hyde Park, London.

In 2004, he was approached by AEG Live to run Bon Jovi’s football stadium shows. This became a full-time position ending up as AEG’s director of international production. Notable projects/tours include The Who, Beyonce, Guns N’ Roses, Prince’s 21 nights at The 02, Rod Stewart, Lady Gaga, JayZ, Britney Spears, Jesus Christ Superstar arena tour, producer of Stephen Lawrence’s 20-year anniversary concert, Michael Jackson’s 50 This is it shows at The 02, plus several years with Bon Jovi touring European stadiums and five years as AEG’s site manager at Wembley Stadium with Summertime Ball.

Since going freelance in 2015, with Production Solutions, Keith has focussed on working as a production director / outdoor stadium show site co-ordinator, along with event H&S.