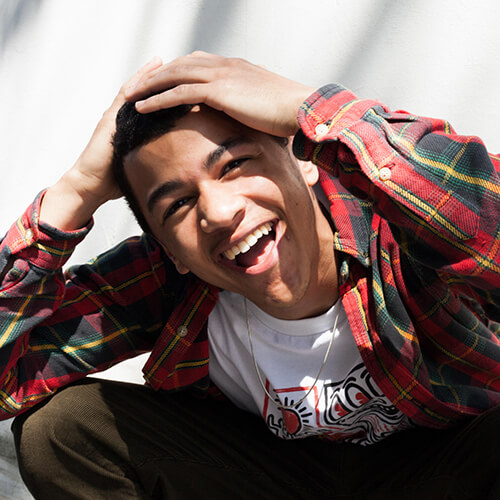 It’s hard to work out what feels more exciting about 20-year-old rapper, Deema. The fact that his borderless approach to rap is something that feels like it could only exist in today’s forward-thinking urban landscape. “I just try and make every song I do different to the last one,” he explains. Or the reassuring fact that amongst a now expansive UK rap culture splintering into cross-pollinating street sounds, a fresh-faced new name can raise his head with a flow that somehow feels just timeless.

Following his explosive debut EP Chew Your Food in 2020, which tore its way across streaming playlists, press and radio, which, for a bit of context, saw Deema claiming five separate tracks all in the same Spotify ‘Fresh Finds Hip Hop’ at the same time! Including the No. 1 spot with anthem Hash Brown.

Media champions ranged from the likes of Toddla T and Jamz Supernova to FADER, Complex and NME. The EP dexterously showcased Deema’s trademark versatility, taking us from party-bound bass-quakes like Hash Brown to conscious bangers like Rat Race, which attempts to dissect the meaning of it all…

Now he’s readying the release of his next opus, Rainbow, that’s set to take things to the next level and beyond, staying true to both his hip-hop stylings and grime roots, but hinting at a crossover ambition that looks set to make him one of 2021’s true breakthrough stars.