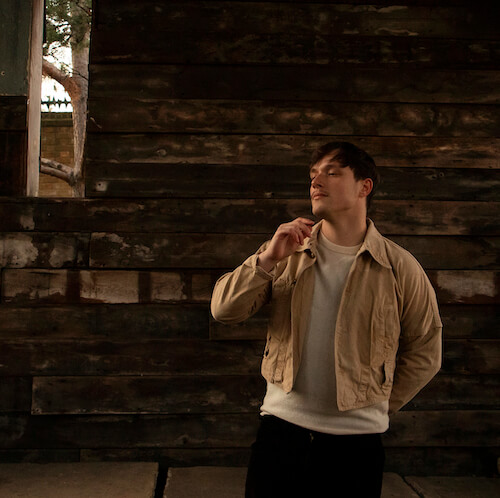 Christy O’Donnell burst onto the scene with his debut EP Homegrown in 2020; a suite of songs that mixed the vocal tenderness of Jeff Buckley or Chris Martin with the swirling musicality of Bon Iver.

Though intensely personal, this is not simple, singer-songwriter territory: the effervescent O’Donnell counts Ray Charles, John Martyn and Chet Baker as among his biggest musical influences. Since its release, Christy has gone from zero to well over a million streams on Spotify alone, and earned the accolade of One To Watch from Amazon Music UK and Wonderland Magazine, as well as The Lowdown, and OUT NOW Magazines.

To achieve such a feat is commendable at the best of times, but Christy managed to grasp success from the jaws of a pandemic-stricken music industry, his songs striking a chord with audiences all around the world. “I didn’t know how the EP would be received, but to have that reception, I was really chuffed,” he says.

Christy’s approach to lockdown was pragmatic, his music and creative pursuits providing a welcome distraction from seemingly endless monotony. “Music has something to do, something to focus on,” he explains, “It has felt like a new lease of life when there’s not much else going on – it’s kept me sane. But not being able to play live has been strange – that’s like breathing air to me and I miss the interaction with real people.”

He kicks off 2021 with a shift in gear and evolution of style. First single Burned Out sees him add swirling string samples and gentle trip-hop style beats to his armoury. It’s a song that was born out of the shared trauma of the last year. “Burned Out is 2020 summed up into a song. There were times when I felt like I was finished with everything and really fed up. I felt very out of control, like so many of us did, so that’s what this song is for me. It’s about feeling helpless, frustrated, and ignored within a flawed system,” he says.

The pandemic and its effects have seen him move into a more political space. “I have evolved as a songwriter, and the situation has shaped the kind of songs I’m writing.” Burned Out is a taste of what’s to come for Christy, with a new EP release planned while he works on his debut album.

At twenty five, Christy has already lived out several unlikely dreams. He’s busked the streets of Glasgow making £400 a day. He’s been in a boy band, Supernova (“Busted meets One Direction – the music was terrible”); he’s played the lead in an indie film, Moondogs, and he’s currently two seasons in as a romantic hero in the time-travelling Disney series Find Me In Paris. He’s even climbed Arthur’s Seat with Rufus Wainwright… But beneath the young Glaswegian’s many incarnations is a serious musician, as the success of Homegrown attests.

“I wanted people to listen to every single element of this record,” he says. “I want every instrument to be played with expression and beauty, and it’s just my job to bring them together. I hope people hear the music like jazz – where every part is as important as the next, and the violin or trumpet means just as much as the voice. I just wanted to create something beautiful.”

O’Donnell had an irregular start in life. He came into the world four months early, and has always wondered whether this might explain his unusual sensitivity to light and sound. “I was out of the womb for four months of my development,” he says. “For me, the whole world is super sensitive, lights flashing; I get distracted so easily, and I can hear things a mile away. Everything is exciting to me. People think I’m off my nut because I have a lot of energy, but it’s only because I feel like I pick up everything.”

The world seems alive to him, buzzing with experiences and he’s keen to try everything – one of the reasons that acting has always appealed. He describes his inability to sit still as his “superpower” – but that superpower has got him into trouble in the past…

O’Donnell had always been a natural at music, learning alto sax by ear from the age of nine, and discovering the guitar at fourteen via his hero John Frusciante of the Red Hot Chili Peppers (“It was like being blind and discovering colour,” he says of learning to play. “When I felt bad I didn’t know how to deal with it until I found music.”)

At school in Glasgow he would skip chemistry and go to the library instead, using the Sibelius programme to write his own music – the software settled his mind and allowed him to be creative. Over the course of several missed chemistry sessions, Christy composed a 24-piece “fusion-jazz” concerto for trumpet (he was listening to a lot of Zappa’s Hot Rats at the time).

His teachers didn’t believe the music was really his, and he was suspended for plagiarism during the crucial period of his final exams. Anxious to prove them wrong, he wrote an orchestral piece called Victory Song to prove he wasn’t faking his talent, to no avail.

It was then that O’Donnell began to explore his rebel streak (“I realised there is no point trying to conform,” he says) and set out on the unusual creative path that has enabled him to achieve so much in such a short space of time.

O’Donnell explains that he found his voice as a busker on Glasgow’s famous Buchanan Street as a teenager. He’d always wanted to sound like Jeff Buckley, imitating him in the shower as a child, but in front of the crowds of onlookers as a street musician he learned to let his feelings run wild. “Singing is basically letting out your emotions in a weird wail,” he laughs. “And after all the busking, I know a good wail from a bad one.”

From age fourteen, he was writing songs on his phone using Garageband: his first was inspired by the death of a man in his local community, and set up the signature sensitivity to be heard in his songwriting, which broadens experience out beyond the personal to explore the power of love and the way it lingers in the mind.

It was a far cry from the music he went on to play with the boy band Supernova, who came about after he was spotted by the manager of the nineties group 911, and featured two other boys with model good-looks, hand-picked by O’Donnell himself. “I did it totally for the buzz,” he says. His plan – as with accepting the part in Find Me In Paris, three seasons of which aired on Hulu – was to pay the bills in an interesting way, until he got to a position to make the music he really wanted to make.

Christy’s early releases were inspired by the breakup of a serious relationship from a girl whose family had become his own, after a difficult adolescence.

At sixteen, O’Connell became all but estranged from his parents in Glasgow: his father had walked out on the family, leaving him with full responsibility for supporting his mother, who suffered from mental health issues. When that situation reached breaking point, he moved in briefly with his grandmother – then hit the road, busking around Europe with a friend.

Meeting his first love found him a new family into the bargain. “I couldn’t understand my own family,” he says. “My girlfriend’s family home was so caring and safe and warm – I had missed that for so long that I latched straight on and realised what I had been missing.”

When their relationship ended, O’Donnell faced new alienation, and the confusion of realising that the closest person in his life would no longer figure in it. “It was so similar to a death, being locked inside your own mind with them in there, and no longer having them,” he says. He describes the breakup as like “coming off heroin.”

Christy employs an unusual, intricate guitar style which he developed busking, gliding through a chord and “using a weird pattern with my hand,” throwing in little jazzy fills.

It was partly inspired by his hero John Martyn. Jazz has always been one of Christy’s main musical stimulants, just one of the directions he might pursue in the future. “I’m not scared to try different things, I’m not scared to push myself. I’m just doing what I love and trying to do things that are interesting,” he says. “I just want to do something that doesn’t sound the same – to create something that I love.”

2021 will see Christy evolve his soundscape further, in what promises to be an exciting year for this fast-rising talent.